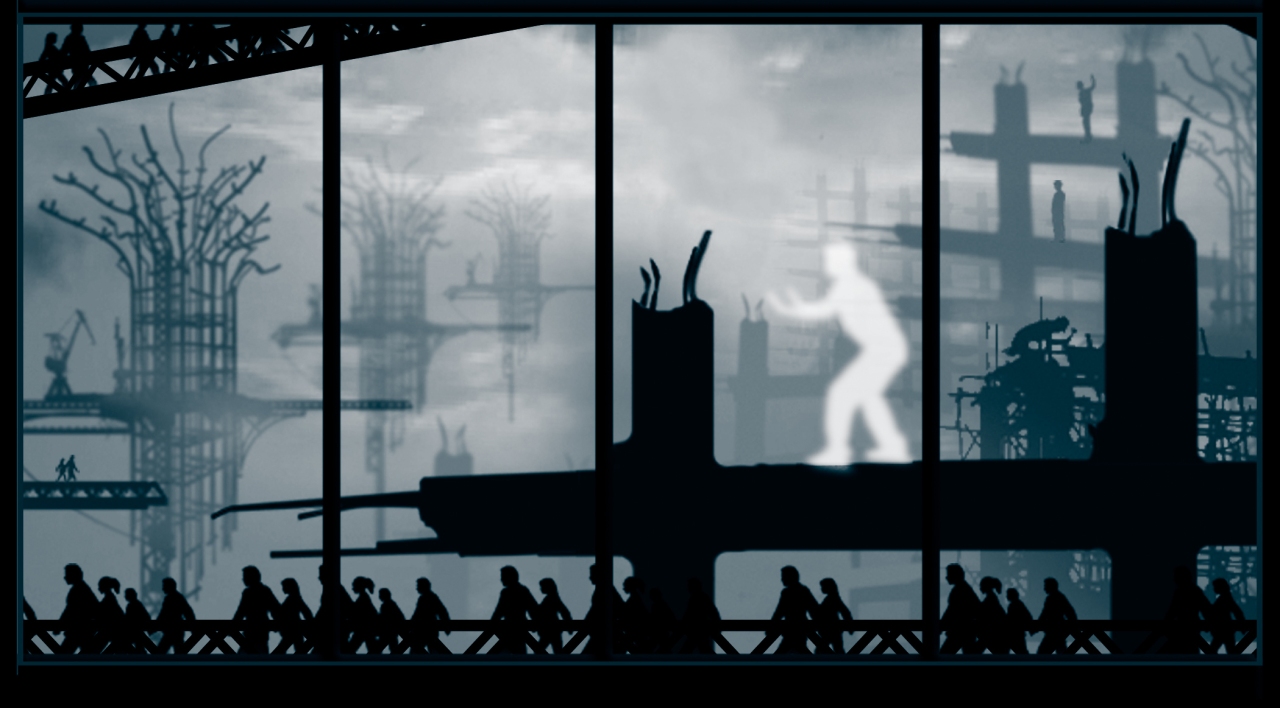 Venae Cavae is an interactive video installation centered around themes of decay, revitalization, and the relational aesthetics that underpin such transformation. Like the veins of the same name in human body, which carry deoxygenated blood back to the heart to be revitalized, the viewer and passersby are transported into the landscape, to become signs of life, light, and vitality amidst an ambiguous landscape. This landscape becomes a new arena for bodily interaction, in which virtual space is intermingled with real space. Just as the passersby activate the virtual space of the installation, they simultaneously activate the physical space of Market Street itself, becoming analogous signs of life, light, and vitality. This multiplicity of space is folded into yet another dimension with the accompanying light and sculptural installation in the physical space behind the video. The projected, sometimes inverted shadows, traversing these disorienting spaces ultimately generate relational encounters in which creative acts coauthor a further understanding of our surroundings and ourselves. Venae Cavae marks the first of a series of collaborations between artists Marc D’Agusto and Eric Valosin, who extend similar relational revitalization efforts to their work with Gravity Arts Initiatives.

Marc D’Agusto’s work examines nuances of transformation by shifting through the rubble of contemporary life. Working in a variety of traditional and new media forms his work explores catharsis and the shedding of the old self to the essence of becoming a renewed generative identity, the journey of ruin to renewal. Like a molting cicada shedding its past life, his work investigates traces of discarded history and alludes to new beginnings. He expresses this process of building up, peeling away, scraping down, and building up again – as a ritual manifestation of our daily movement through life. He often uses building elements, architectural forms, constructed and projected spaces as a metaphor for the framing of the human body and mind. Bodies and shelters are designed to contain living spirits, yet both are altered by time and decay. Marc received a B.F.A. in Studio Art from The College of New Jersey in 1994 and an M.F.A. from Montclair State University in 2011. His work has been exhibited throughout the East Coast including New York, New Jersey, Pennsylvania, Georgia and Florida. He worked 20 years as a designer and art director throughout New York, New Jersey and Philadelphia before changing careers. Marc is a dedicated artist, professor and is the founder and executive director for Gravity Arts initiative that uses art and innovation as a catalyst for community revitalization.

Eric Valosin is a New Jersey based multimedia artist. Using light and projection with painting, drawing, and new media, his work explores the potentials of mystical experience since postmodernism, in a world whose space is more often cyber than sacred and whose worldviews have begun to transcend conventional transcendence. Combining studies of traditional mysticism, postmodern theology, and post-structuralist philosophy he aims to challenge perceptual expectations and interactions with mediation, opening new meditative spaces for a radical new age. Valosin received a B.A. in Studio Art from Drew University in 2009 and an M.F.A. from Montclair State University in 2013. His work has been exhibited throughout the New York/New Jersey area and in Europe, and he is the recent recipient of an international ArtSlant Showcase award for his projection installation work. Valosin also teaches at the Collective Art Tank in Asbury Park, NJ and serves as the Coordinator of Fine Art Initiatives for Gravity Inc., which uses art and innovation as a catalyst for community revitalization.

The new rotation will begin October 10th 2013 at dusk. Come by and experience the night life.